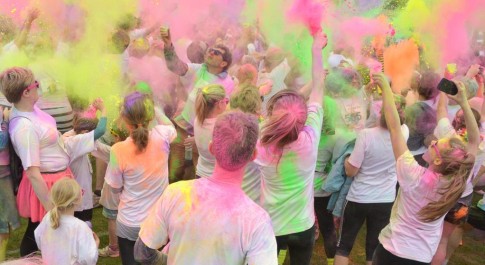 Over 600 participants raised over £10,000 for Oakhaven Hospice at Sunday’s 5K ‘Colour Run’ hosted at Brockenhurst College.

Coloured dust was showered at the runners throughout the circuit at the different the paint stations, which were overseen by the event sponsors.

The party atmosphere continued right through to the end, as musical entertainment was provided by Samba band, Samba Panasche.

Clare Green, who took part with her daughter and mother, said: “My daughter Katie has cerebral palsy and has never walked 5K before so we were slightly worried she wouldn’t make it round the course.  She was so determined to run some of the way and managed to complete the entire race.

“This is such an amazing achievement for her and we’re even more proud that she raised over £200 in sponsorship,” she added.

Mike Denny, Oakhaven’s Head of Fundraising & Communications, said: “It was a sensational day – everyone entered into the spirit of the event.” 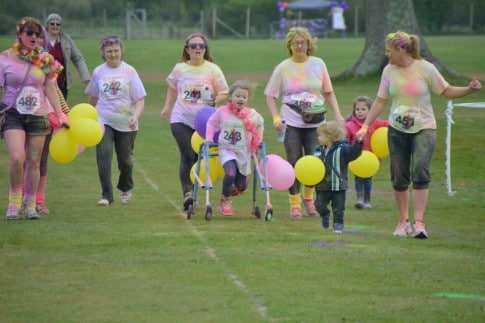 He continued: “It was so much fun and great to see the young and not so young really throwing themselves into it. I would like to thank our hosts Brockenhurst College for kindly allowing us to stage the event there.”

Di Roberts CBE, Principal of Brockenhurst College, said: “We’re very proud of the College’s full  involvement in community events and this one was particularly special, raising funds for such an important local charity. Brock is always a colourful place but this event took it to another level!”