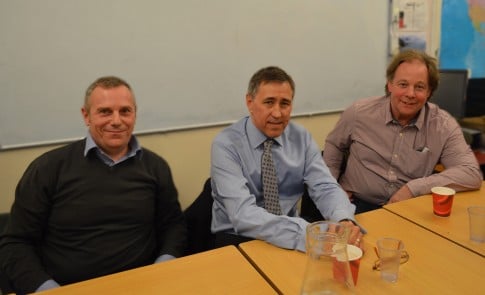 The audience, made up of over 100 students and parents, listened as the Chief Operating Officer told them what he looks for in an applicant.

Tony previously worked as the Chief Executive at Beales and joined 99p Stores a year ago and currently employs over 7,000 staff.

He also has a daughter who is studying Business and Spanish at the College.

During three question-and-answer sessions the south coast based businessman emphasised the importance of paying attention to detail, particularly when writing a CV.

Among other things, he told his audience: “You need to show a prospective employer that you have the get-up-and-go to be a success.

“Avoid daft email addresses and turn off your phone when you go for an interview.”

Keith is Manager of Berthon boat yard in Lymington, and David Bradley is Managing Director of Bradley Engineering in Brockenhurst.

Deputy Principal Derek Mather said: “We believe it’s important that students who are not aiming for Higher Education get the best information on employment and apprenticeships.”