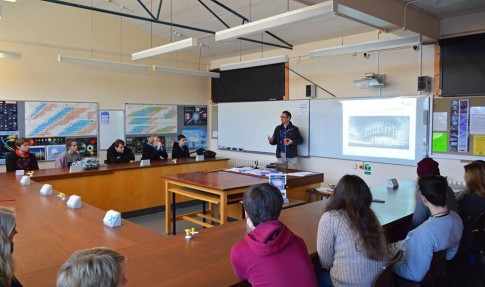 Professor Chris Scott with the students

Professor Scott, who works at the University of Reading’s department of meteorology, delivered a presentation called:  ‘From Brockenhurst to the sun and back – reflections on a career in space science.’

In particular, the presentation to students and staff examined our solar system, galactic cosmic rays and the study of lightning.

In 2014 he led research in solar winds and lightning, which was published in the Journal of Environmental Letter, and suggested that solar winds can increase lightning on Earth.

His other research interests include: space weather, solar terrestrial physics, atmospheric energy, and solar wind influences on the Earth’s ionosphere.

During his presentation Professor Scott said: “Part of the reason I’m here is to persuade you that environmental studies can be fun and interesting.”

“My advice to all of you would be to make yourself stand out and take full advantage of any opportunities that may arise.”

Head of Curriculum for Science, Rachel Hughes, said: “It was fascinating to hear from someone who used to study at this very College, explaining the twists and turns his career has followed over the years.

“He was able to detail cutting-edge scientific theories and exciting new developments in the field of atmospheric and space research, such as the influence of solar radiation on lightning strikes.” 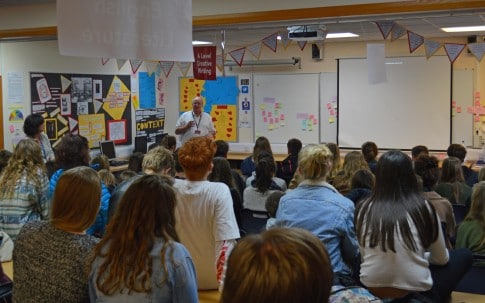 The presentation was followed in the same week with a visit by Professor’s Scott’s colleague at the University of Reading, applied meteorologist Ross Reynolds.

He gave a university-style lecture on climate change to students studying AS and A Level Geography, as well as some Physics students. He also gave advice on applying for university.

Afterwards Ross said: “It has been fantastic to visit the College today. It’s brilliant to see so many students interested in studying Geography at higher education level.”

First year geography student, Erin Garvie, said: “I really like the fact that his speech was so personal. It was very inspiring.”

Head of Enrichment, Sharon Goldsworthy, called the lecture: “A brilliant overview of climate change, the key issues and the impacts.”