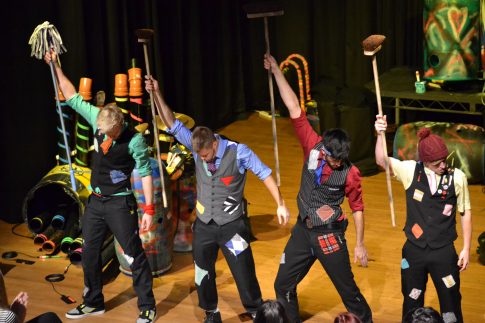 It was a triumphant homecoming for former Brock student Jay Osborne when he starred in hit musical Dreamboats and Petticoats at the Mayflower Theatre.

The 28-year-old from Holbury, who studied Performing Arts Level 3 Extended at Brock, performed as lead guitarist Richard to packed audiences at the Southampton venue.

It was not the first time the talented actor and musician had toured with a successful musical. He has also worked on professional productions such as Lipstick on your Collar, the Madness musical Our House, and the Blues Brothers musical On a Mission from God.

Prior to the Southampton dates, Jay said his stint at the Mayflower Theatre, where he watched shows as a youngster, would be a great moment for him personally. He added that it was extra special to discover that the theatre would be one of the stops on the Dreamboats and Petticoats tour.

Recently Jay toured as part of percussion act Junnk, which was devised as a piece of coursework at Brock. Junnk visited the College earlier this year to perform and share their showbusiness insights with over 100 Dance, Drama and Performing Arts students.