Competition was organised by the Royal Society of Biology 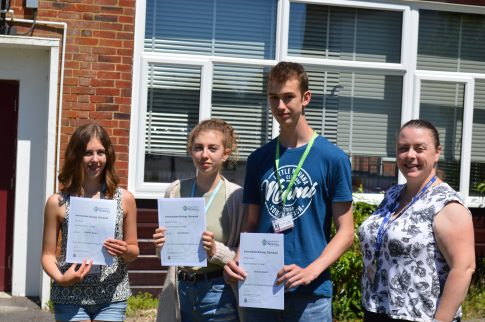 Out of all the UK students who participated only 6.7% managed to score enough for a Gold award, which required a score of at least 58 out of 75.

As a reward, the group will now attend a bespoke training course exploring the ecology of a London Park, organised by The Field Studies Council.

Bruna Masset, who is aiming to study Medicine at University, said of her success: “It was such a surprise because I didn’t do my GCSEs in the UK and the terminology is different here.

“Everything turned out well and I’m glad to add this Gold award to the one achieved in the Individual Maths Challenge earlier in the year, “she added.

Biology Lecturer Liz Dudley said: “The fact that all five students won awards is testament to the hard work they’ve put in this year.

“This is a highly-recognised exam, so their successes will definitely boost their university applications.”

The one-hour exam tested the students’ knowledge of topics covered in their GCSE and first year A Level studies.

It was completed at the College under exam conditions after the students were selected to take part by their teachers.