All-Ways Safe event was ‘best ever’

All-Ways Safe event was ‘best ever’

Brockenhurst College’s recent All-Ways Safe event drew representatives from a range of public authorities and agencies to the College to promote awareness among students of how to stay safe in a variety of situations.

Presentations, demonstrations and discussions were organised by Hampshire Police, Speedwatch, Hampshire County Council, NFDC, the National Park Authority, the RNLI, No Limits, Breakout Youth, It’s Your Choice, St John’s Ambulance the Forestry Commission and the Commoners Defence Association, among others.

Commoners brought along a New Forest Pony to help raise awareness of the potential consequences of poor or irresponsible driving on forest roads. Some students were shocked to learn that 63 animals were killed on New Forest roads last year, with 35 animals injured. Most of these were ponies.

Student Liaison Officer Anthony Stone gave a seminar on the risks that come from casual alcohol and drug use, and Brock counsellors addressed issues connected to mental health. 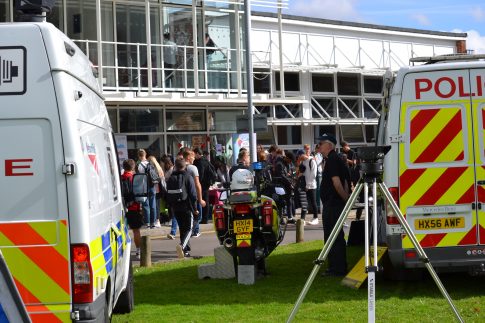 Meanwhile, The Hampshire County Council Road Safety Team brought along goggles that simulated the effect alcohol has on your co-ordination. Students were asked to complete an old-fashioned touch your nose and walk toe to toe test, which they reported was considerably more difficult when wearing the goggles.

Eighteen-year-old Public Services student Chloe Franklin said on the day: “I’m really impressed with how much is going on. There’s such a variety in the amount of services that have come along and a lot of them are using something interactive as an ‘icebreaker’.

“My friends and I have just had a go on the remote-control cars that the National Park Authority brought with them. We had to drive them around a track safely without hitting any plastic animals.”

Commoner Jo Ivey, who also heads up the Shared Forest road safety initiative, said afterwards: “Today has been a fantastic success. We’ve had the opportunity to speak to a great number of students about the extra precautions that need to be taken on the roads within the New Forest.”

College Principal Di Roberts CBE said: “We are committed to helping ensure that our students remain safe both in and out of college, which is why we organise events such as this one.

“I’m really pleased with the student turnout today and, importantly, with the range of organisations whose representatives have found the time to attend. It has been our best ever event of this kind.”