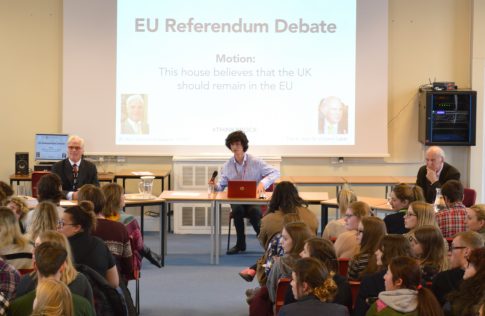 Major political figures Desmond Swayne and Vince Cable argued over whether Britain should remain a member of the European Union during a debate at Brockenhurst College recently.

MP for New Forest West Mr Swayne, who supports the leave campaign, sparred with the former Business Secretary, who wants Britain to remain in the EU.

It all took place in front of a packed audience of students and teachers, and against the backdrop of the national referendum on EU membership to be held next month.

During the 90 minute event both men presented their cases, rebutted their opponent’s arguments and answered questions from the floor.

The debate was chaired jointly by students and Debating Society members Adam Reeves and Isaac Hadfield, who ably maintained order throughout the passionate exchanges.

In the final ballot, audience members voted overwhelmingly to remain in the EU: 70% to 28% with 2% undecided.

Prior to the encounter Mr Swayne championed student involvement in the wider EU debate, saying: “It’s entirely proper that students, with their whole lives ahead of them, should take an interest in the potential change in the status of the United Kingdom.”

Mr Cable echoed this sentiment by saying: “It’s enormously important for their future… Whether or not we are a member of it (the EU) will affect them for many years to come.”

Co-chair Adam Reeves said: “The career I’m hoping to go into will involve a great deal of public speaking. So an event like this in front of my peers, and obviously honoured guests, is a great opportunity for me to practise that skill.”

College Principal Di Roberts CBE said afterwards: “We are delighted to have welcomed Mr Swayne and Mr Cable to the College for this unique event, which demonstrated how hard we work to ensure that learning here is relevant to the world outside.”