Two young golfers from Brockenhurst College won the Junior British title at the Home Nations Championships in Portugal last month as members of a team from Bramshaw Golf Club. 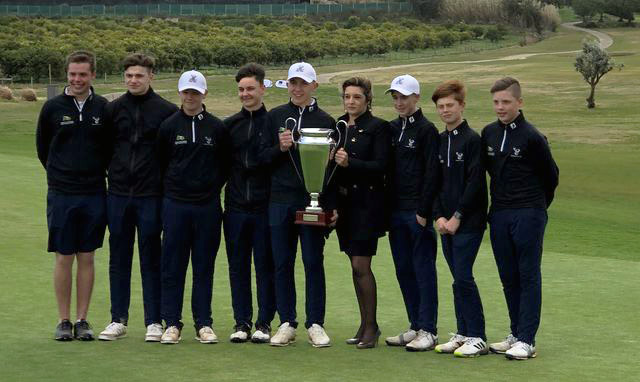 Sixteen-year-old Ciaran Simpkin from Totton (pictured first left) and Declan Mason (17) from Lyndhurst (second from left), were part of the eight-man side who beat teams from England, Ireland, Scotland and Wales.

The Bramshaw lads were unbeaten throughout the tournament at the Morgado Golf Resort and won their pool to face Welsh team Llanwern in the final.

It was a closely fought match, but Bramshaw won 4-2 over the last nine holes to secure the Home Nations title.

The victory maintains a winning streak for Bramshaw, who won a series of qualification rounds during 2017, including the England National Final last October.

Team members put a lot of time and effort into regular squad sessions to practise and refine their skills in preparation for the tournament.

Bramshaw Golf Club and parents of the team also worked hard to get them to Portugal by organising various fundraising events and securing sponsorship from Blue Star buses.

In a statement on the Club’s website, Junior Organiser Nev James said: “It’s been a fantastic opportunity for the boys to represent their country.

“We are all very, very proud of them and look forward to starting the 2018 season,” he added.