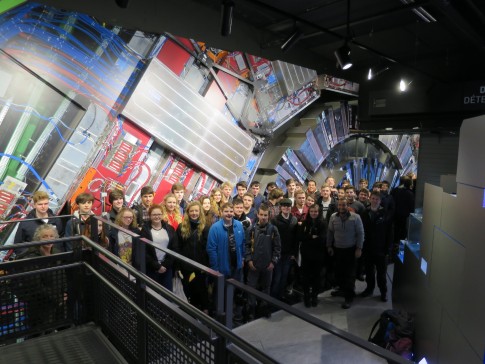 Forty A and AS Level students made the trip to the laboratories where the world famous large hadron collider (LHC) is based.

The LHC was built to unlock the deepest mysteries about matter in the universe, making it the leading example of particle physics research in the world today.

The group then toured the History of Science Museum and the ICT Discovery Centre at the International Telecommunication Union, which is part of the United Nations.

Finally they explored Geneva and also squeezed in a trip to picturesque Mont Salève.

Student Joshua Gooding said: ““It was absolutely fascinating to go and visit the Particle Physics Laboratories at CERN. I really enjoyed the trip and learned a lot.”

Physics and Maths lecturer Hugo Gibson said: “It was fantastic to be able to take students to this unique facility, meet researchers and get an insight into their cutting edge research.

“The Large Hadron Collider at CERN is the world’s largest scientific experiment and the site of most of the major discoveries in experimental particle physics in recent years, such as the discovery of the Higgs Boson particle.”