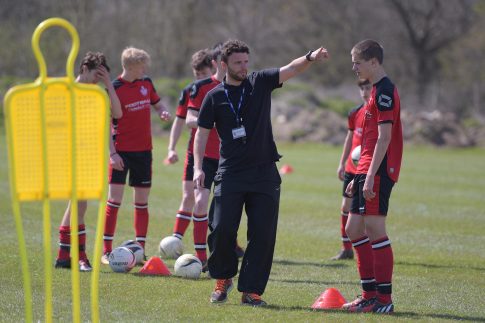 As a result, the longstanding Brock Football Academy boss will be leaving the College to take up his new role at the end of this week.

The duo made the switch together from Weymouth FC, where Tom worked part-time until recently.

Mark and Tom will replace the old coaching team at Southend, which was led by England legend Sol Campbell.

Tom, who used to play as a holding-midfielder for New Milton Eagles and attended Highcliffe School, said: “I’m immensely excited about the challenge and feel very proud and privileged to be accepting my new role.

“At Southend we need to create our own culture and environment – that has to come first. Then it’s all about winning matches and creating a winning mentality.”

The former Assistant Coach for England Colleges added: “I’d like to thank the people at Brockenhurst College for their support in my career to date – Brock has been a major influence on my life.”

The 29-year-old from Mudeford met Mark Moesley while analysing training videos of players for AFC Bournemouth when Moseley was training Bournemouth U23 players.

Moseley eventually called Tom and asked him to join him at Weymouth and has stuck with him ever since.

Together, Molesley and Prodomo have masterminded back-to-back promotions for the Dorset club, which has now broken into the National League.

At Southend United the managerial partners have some rebuilding to do following the club’s relegation from League 1 earlier this year.

Kevin Jones, Head of Curriculum for Sport, said: “We are absolutely thrilled for Tom and wish him every success in his managerial career.”