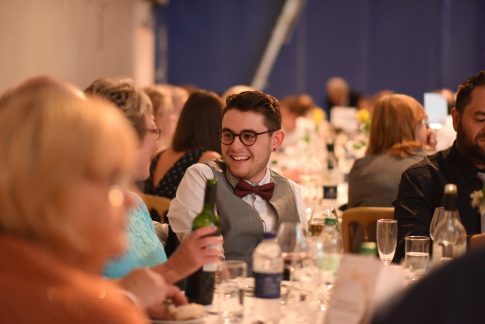 Outstanding students and their achievements were celebrated at Brockenhurst College’s Gala Awards on Friday.

In total, 38 students were honoured at the ceremony in the College’s main hall, which was attended by students, staff, parents, supporters and sponsors.

Isaac Hadfield from New Milton picked up the coveted Student of the Year Award, sponsored by Waterside-based GEO Specialty Chemicals, for his outstanding overall performance both in and out of class.

The eighteen-year-old former Ballard School pupil is about to begin studying Philosophy, Politics and Economics at the prestigious University of Oxford.

Isaac said: “I chose Brock because of the extra freedom the College gives you. I was done with ‘school-school’ – I didn’t want that… Looking back, I believe you get out of Brock what you put in. It’s a nice balance of support and freedom.”

Abbie Wise from Lymington was named Student Ambassador of the Year, and Beck Renouf, also from Lymington, won the Chris Campbell Memorial Prize for outstanding coursework.

The evening began with a drinks reception before guests were invited to take their seats.

They also ate a two-course meal prepared and served by students from the College’s on-campus restaurant MJ’s.

Principal Di Roberts CBE said: “These Gala Awards celebrate the success of students who have achieved so much in their time at Brock – they have truly earned the title ‘Brock stars’.

“I look forward to following their continuing success as they progress to making a very meaningful contribution to society,” she added.

All awards were presented by Di Roberts and Chair of Governors Graham Beards.

Access to Higher Education Student of the Year   Ruth Woodnutt

Apprentice of the Year 19+   Jess Bedding

Art, Design and Photomedia Student of the Year   Saskia Norris

Performing Arts and Music Student of the Year   Cayton Francis

Social Sciences and Business Student of the Year   Mani Goyal

Employer of the Year   Cyclex

Teacher of the Year   Alex Crutchley