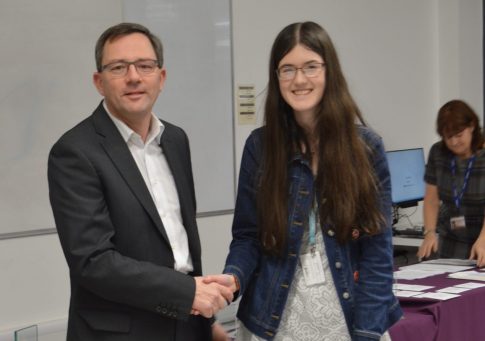 It saw 25 students pick up gold or silver awards, along with cash prizes, across the full range of STEM subjects.

Winners earned their awards for a variety of reasons, but all showed dedication, commitment and hard work in their studies.

Graham Dunkley from GEO and David Trossell from Bridgeworks presented the certificates, along with £50 for gold and £25 for silver.

Graham Dunkley said afterwards: “GEO Speciality Chemicals is very pleased to be associated with Brockenhurst College and particularly the STEM Awards.  I would like to congratulate the award winners for all their hard work and efforts.”

Meanwhile, David Trossell from Bridgeworks said: “Young people are the future of our country and the economy, so the achievements we recognise tonight are really encouraging.”

The ceremony, which was held at the College’s new STEM Centre, was also attended by Principal Di Roberts CBE and Assistant Principal Ann Johnson.

Ann Johnson said: “As well as extending my congratulations to the students who won awards, I wish to thank our sponsors whose contribution has made this event a real success.”