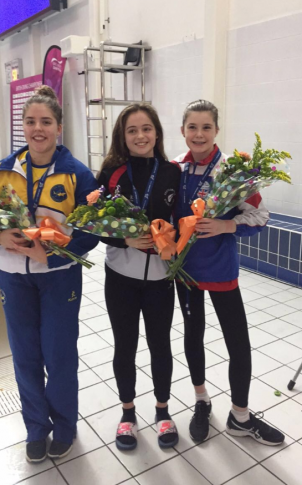 The competition took place at the Plymouth Life Centre from the 26-28th January, with Lucy, who was representing Southampton, competing on the Saturday against 12 other divers from across Britain.

The seventeen-year-old also competed in the senior category, diving from the 10m platform, from which she claimed seventh place overall.

Lucy, who is from Dibden Purlieu, has been diving for over seven years and trains for up to 15 hours a week at the Quays Diving Complex in Southampton.

Lucy said of her latest success: “This year they had a new media setup, so the competition was broadcast on TV, which I’ve never experienced before, so that was really exciting.

She will also compete in the Junior Nationals in April, and then plans to go to University in September to study Sports Science.

“Initially I thought I’d finished second, but because they took the score from the preliminary round, I found out I had actually come first. It felt really good, and I wasn’t expecting it at all.

On the subject of college, the young diving star said: “I’m able to balance college work quite well with diving.”

Lucy’s teacher Bryn Coslett said: “Lucy is an excellent student and has managed to balance her heavy commitments of diving practice and competition with her academic studies.

“It’s fantastic to hear of her success at the British Diving Championships, and we wish her all the best for the Junior Nationals,” he added.