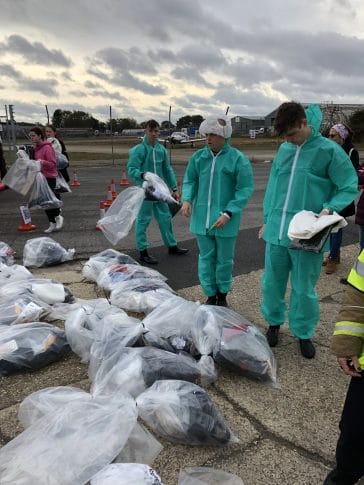 The second years, who all have ambitions to join the Fire Service, joined around 50 other volunteers in a training aircraft from which they were evacuated.

Nine fire engines with approximately 80 firefighters were on the scene, alongside several NHS ambulances staffed by around 25 paramedics.

A police presence completed the multi-agency response, giving the exercise a high degree of realism.

Under the training scenario a suspicious white powder had been discovered coming from the vents on board a Boeing 737 shortly before take-off.

Passengers and crew had become unwell and the Captain had chosen to abort take-off.

Once outside the aircraft, casualties and bystanders were mock-decontaminated by shedding clothes and putting on distinctive orange over suits.

In a real-life incident they would then wait for national decontamination assets to be deployed from elsewhere in the region before embarking on the second stage.

However, on Saturday all necessary assets were on standby, which meant participants could shed their over suits and proceed quickly to a mobile shower facility.

After showering they entered a decontamination tent where they finally shed their underwear and put on green under suits and waterproof over suits before being taken to a debrief. 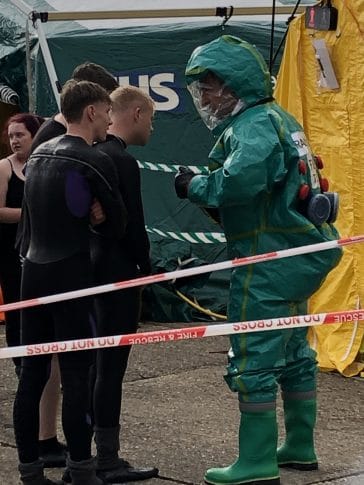 “Also, having the chance to talk to the crews afterwards was a good opportunity to ask any questions about the drill and about careers.”

The four-hour exercise was organised by Dorset & Wiltshire Fire and Rescue, who were joined by fire crews from Hampshire & Isle of Wight and Devon and Cornwall.

The drill was the first of its kind since the COVID-19 pandemic began, and the equipment used was last deployed for real following the Salisbury Novichok attack of 2018.

Former Brockenhurst College student and Fire Officer Matt Kiddell, who is a District Commander stationed at Westbourne and also a National Resilience Coordinator, was among the response chiefs.

“It was also a prime opportunity for the students to learn about career trajectories in the Fire Service by speaking to Brock leaver Matt Kiddell who has risen through the ranks impressively.”