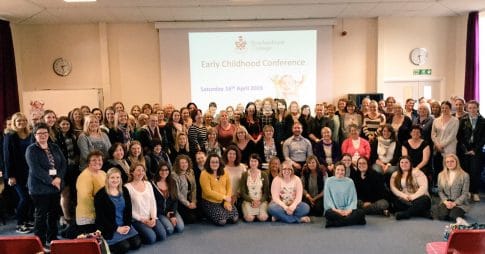 Brockenhurst College staged its first ever Early Childhood Conference recently, drawing over 90 early years professionals from across the region.

Research fellow from the University of Chichester, Kate Wall, opened proceedings with a keynote speech on supporting children with special educational needs.

She was followed by early years teacher Sarah Emerson, who spoke on the issue of supporting children’s emotional development.

Then Alex Sabine from Isle of Wight College gave a talk on celebrating emergent education in the UK.

After lunch the conference comprised workshops on children who have experienced bereavement, understanding autism in early years, and play and pedagogy.

Kate Wall said afterwards: “The conference was overwhelmingly well received by all attendees, who engaged fully in every session.

“Many spoke to me before leaving and said how inspiring the day had been, and I was equally inspired by the early years passion of all present,” she added.

Head of Early Childhood, Health and Professional Studies at Brockenhurst College, Lisa Bell, said: “Here at Brockenhurst we will continue to offer the best opportunities for the early years sector, not just those who have many years of experience, but also for those in training, newly qualified or needing a refresher.”