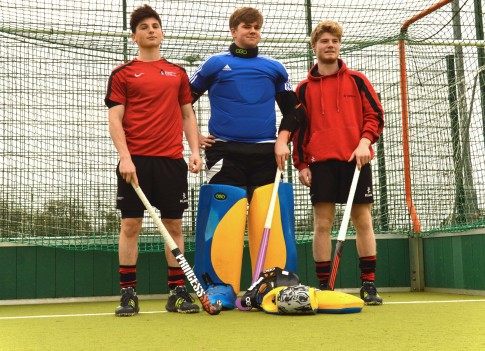 Footballers Harvey and Domenic secured their spots alongside 16 other elite young footballers from across the country.

They will now attend a training camp at Manchester City’s training ground before playing two warm-up matches in the UK ahead of an international tournament in Italy.

Head of the Football Academy, Tom Prodomo, said: “I’m really proud to have two Brock students out of the eighteen in the final squad – it’s an excellent achievement.

“I’m looking forward to seeing how they get on and we will support them in any way possible.” 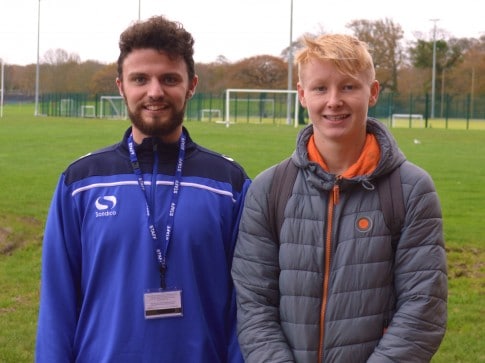 From L-R: Head of the Football Academy Tom Prodomo and Harvey Slade

They now look forward to a busy fixture list that includes a host of international matches, plus clashes with top players from the Royal Air Force and university teams.

Clare Hicks, Head of Curriculum for Sport, said: “I am so proud of their achievements.

“As a College, we’re absolutely thrilled that three of our students have been selected for the team.”

Harvey Slade from Bournemouth currently plays as a midfielder for Christchurch Youth.

The former Ballard School pupil is studying a Level 2 BTEC Diploma in Sport.

Harvey said after his call up: “I’m really pleased and am looking forward to the future – my dream is to play football for a living”.

Domenic Panesar-Dower from Bournemouth currently plays as a midfielder for Poole Town.

The former Bournemouth Collegiate School pupil is studying for AS Geography, Psychology and Physical Education.

Henry Emmett from Salisbury currently plays as a goalkeeper for both Gillingham and Reading.

Henry said of his GB call up: “I was in shock when I found out – it didn’t really sink in for a few days.”

Tomek Bruml from Lymington currently plays as a defender for Havant.

The former King Edward VI pupil is studying for a Level 3 BTEC Diploma in Sports and Exercise, along with AS Biology.

Tomek’s ambition is to work in sports science.

Charlie Cooper from Ferndown currently plays as a centre forward for Reading.

Having previously attended Queen Elizabeth’s School in Wimborne, Charlie is now working towards his Level 3 BTEC Diploma in Sports and Exercise.

Charlie said: “I’m really excited to play at international level – all the hard work has really paid off”.