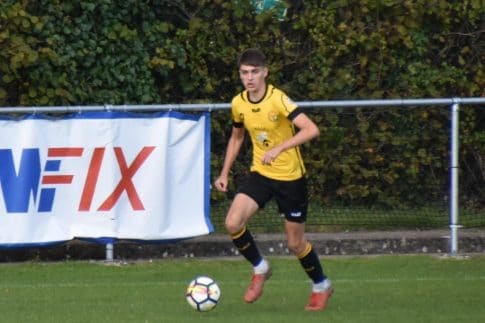 Brock Football Academy star Josh Cook has won an exclusive sports scholarship to an American university where he hopes to achieve his dream of becoming a professional footballer.

The eighteen-year-old holding-midfielder from Christchurch, who also plays for Brockenhurst FC, attended trials at the University of South Wales recently, where he was identified by a talent-spotting agent.

The agent quickly informed Davenport University in Michigan of Josh’s talent and sent them videos of him in action.

Eventually the university approached Josh, offering him an 85% funding contribution to study a four-year degree in Sports Management that includes a masters qualification.

Chelsea fan Josh, who idolised Frank Lampard as a youngster, revealed he was visiting Brockenhurst College as a Year 11 Twynham School pupil when he was first told about the scholarship route.

And after he showed his skills on the same college pitches where Danny Ings and Sam Vokes developed their skills, Josh’s lecturers decided to put him forward for the trials in Wales.

The young player said he hopes to one day be included in ‘the draft’, which is the established shop window for Major League Soccer (MLS) clubs looking for new talent.

Ahead of his big move to the US, Josh said: “They have so much more money over there to invest in player development, so I’m really looking forward to benefitting from that enhanced level of support.

“My ultimate ambition is to make it as a professional footballer – 100%,” he added.

Brock Head of Curriculum for Sport, Kevin Jones, said: “Josh has been a valued member of our Football Academy for the last two years, and this opportunity is a reflection of his hard work and commitment throughout that time. We wish him the best of luck.”

In America, Josh will train and play under an assistant coach who is also involved in the academy of nearby MLS side Chicago Fire.

He is due to fly to the US in the summer for his first training camp on 9th August.