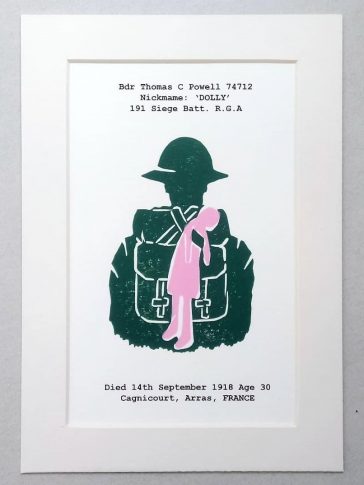 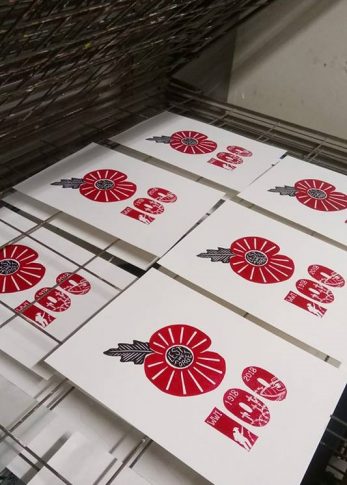 Brock staff member Hannah Fitzpatrick has created lino print artwork in memory of her relative Thomas Charles Powell and every other person killed, wounded or affected by the First World War.

Hannah, who is an Art Technician and Enrichment teacher at Brockenhurst College, uncovered Thomas’s story after discovering him by researching her ancestry.

After passing his medical he enlisted at Colchester, joining the 191st Siege Battery, Royal Garrison Artillery, and embarked for France in early 1917.

His fellow soldiers in the battery nicknamed him ‘Dolly’ after he bought a rag doll for his daughter that he kept strapped to his back.

Aged just 30, Thomas died on the 14th September 1918, in Cagnicourt, France, from gunshot wounds to his left leg, left arm and right eye.

Hannah wanted to create something in memory of her distant relative and to mark this year’s centenary of the end of the First World War.

Her handmade lino prints have been seen by many more of Thomas’ relatives after she posted them on social media.

Relatives as far away as New Zealand have contacted Hannah for her prints and to thank her for helping to keep Thomas’s memory alive.

Hannah is not charging for her work but has instead asked for donations to the Royal British Legion.