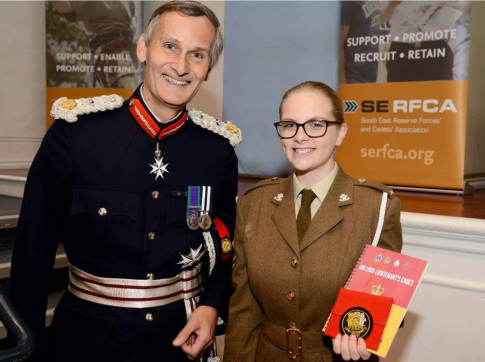 Health and Social Care student Hannah Jenks has received the Lord Lieutenant’s Cadet Award in recognition of her contribution and commitment to the Army Cadet Force and the community.

The sixteen-year-old from Holbury was chosen out of 4,000 cadets from across Hampshire and the Isle of Wight to receive the accolade from current Lord Lieutenant of Hampshire, Nigel Atkinson.

Every year, the Lord Lieutenant appoints a cadet from each Community Cadet Force who will support him on official engagements. That job is now Hannah’s.

The rising star, who is a cadet at both Blackfield and New Milton detachments, has had the honour of greeting the Queen upon her arrival at Portsmouth Harbour for the naming of the new aircraft carrier, HMS Queen Elizabeth.

She has also met other members of the Royal family, including the Duke of Kent, the Duchess of Gloucester, and the Princess Royal when they have visited Hampshire.

After learning of her special recognition, Hannah said: “I felt honoured and proud to receive such a prestigious award.

“What I enjoy about my involvement with the Army Cadet Force is all the new experiences and meeting new people,” she added.

After completing her Health and Social Care course Hannah hopes to join the Army as a combat medic.