Hard Brock Café at Brockenhurst College donates over £1,000 worth of produce to New Forest Basics Bank

Hard Brock Café at Brockenhurst College donates over £1,000 worth of produce to New Forest Basics Bank 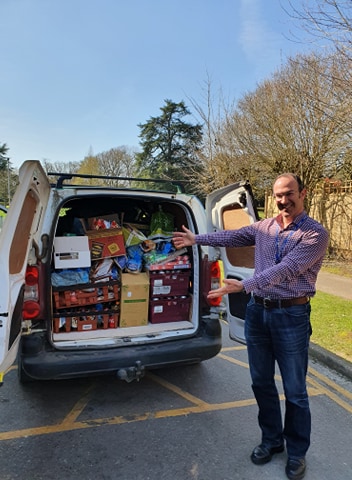 Brockenhurst College’s Hard Brock Café has donated over £1,000 worth of food and drink to the New Forest Basics Bank in Lymington following the College’s shutdown over Covid-19.

The move comes amid concern that food banks are running low on supplies following reports of food stockpiling by shoppers.

It was officially handed over by the College’s Vice Principal and Director of Finance, Limor Feingold, on Tuesday, when a van came to the College.

All the foodstuffs have now arrived at the New Forest Basics Bank headquarters at the United Reformed Church in Lymington, from where it will be distributed to local people in need.

The organisation said it had already sent 132 food parcels in March, which together have fed around 350 people for a week.

New Forest Basics Bank Trustee, Sue Norris, said: “This astonishing generosity will mean so much to so many local people who find themselves in desperate need of food and help.”

Limor Feingold from the College said: “The Hard Brock Café is a business model within the College that is self-sufficient in terms of buying and selling foodstuffs.

“We could not allow any of the produce to go to waste in good conscience, so we are very pleased to be supporting this worthy and noble cause.”