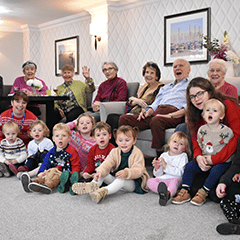 The intrepid two, three and four year-olds from Highwood’s Squirrels and Owls groups made the trip by minibus alongside nursery staff.

Wearing their festive jumpers, the 15-strong group performed Christmas classics including Silent Night, as delighted owners at the development looked on.

Mince pies and sherry kept spirits high among an audience that rewarded the young singers afterwards with a chocolate Santa each.

Everyone then joined together to listen to a Christmas story, told by Highwood Nursery staff.

Nursery Manager Sarah Bower said: “Travelling somewhere to do the job of spreading Christmas cheer was a novel learning experience for the children, who behaved impeccably.”

Caroline Haswell from Churchill Retirement Living, the company that built Knights Lodge, said: “Thank you to the children and staff at Highwood Nursery whose recent visit really brightened our owners’ day.”