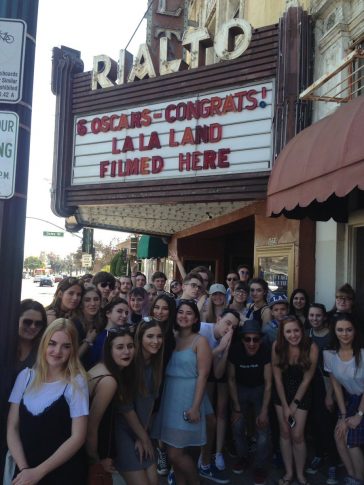 Forty Film and Media students flew to Los Angeles recently to tour film studios and soak up the Hollywood atmosphere during Oscar week.

The group also ran into a couple of A-List celebrities who took the time to speak to them.

Out in public they spotted action movie legend Arnold Schw
arzenegger riding his bike, and to their delight the Terminator star stopped to pose for pictures and sign autographs.

Not only that, they bumped into James Bond star Naomi Harris at LAX international airport, who stopped to talk about the film industry.

However, the main star-gazing event was a visit to the Oscars red carpet to watch top industry names make their way into the 2017 Academy Awards ceremony.

Other highlights included visits to Universal and Warner Brothers studios, plus some famous locations from big movies such as La La Land, Donnie Darko and Ferris Bueller’s Day Off.

In addition, it was an opportunity to catch up with some of the seven former Brock students who now live in LA and work in media.

Current student Jack Currie said: “Being in LA was just perfect. The whole city looked like it was straight out of a film set and some of the sets we went to were so big they felt like small towns.

“It was amazing to see the locations that you recognise from not only the blockbusters of today but the films you grew up with. It was the trip of a lifetime,” he added.

Media Lecturer Alex Whitwell said: “Sometimes education has to take place outside the classroom, and in subjects like ours this needs to be in the form of an experience.

“Each day started at 8am, finished at 11pm, and was full of fun things that ultimately inspired the students to realise that with hard work they can break into the industry.”