Three Brock Hospitality students have laid strong claims for inclusion in the UK WorldSkills squad that will compete in the WorldSkills finals in Russia in 2019. 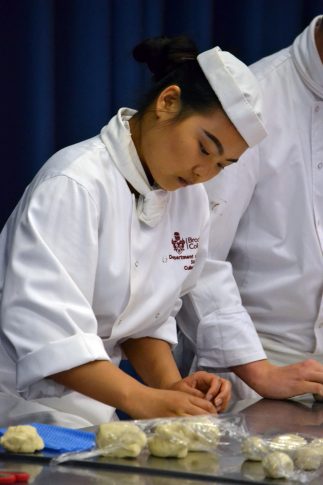 The trio showcased their skills at a regional heat at South Thames College in London recently, hoping to be selected for the national finals in Birmingham this November.

Supatthra ‘Suzie’ Viriphan competed in the Kitchen category, while Jack Gadd and Mark Russell sought to impress judges in the Restaurant Service Category.

Only ten regional competitors from each discipline will go through from the WorldSkills regional heats to the UK WorldSkills final, which makes competition particularly fierce.

The winners of the UK final will then be included in the UK’s WorldSkills squad for the international finals in Russia. However, they might not keep their places if next year’s winners are stronger.

The three budding hospitality professionals will have to wait until later this summer to discover if they have been successful in their regional heats.

Each one will be hoping to emulate the success of former Brock student Lucy Jones, who represented the UK in the Restaurant Services category at the WorldSkills final in Brazil in 2015.

Hospitality Lecturer John MacArthur, who was in London for the event, said: “From my point of view it’s an enjoyable thing to support students in this endeavour when they’ve shown such commitment to their studies.”