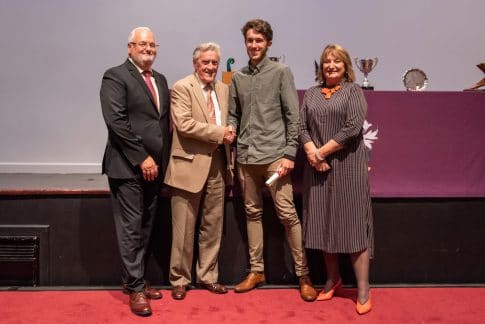 A promising young scientist from Lymington has become the first student to benefit from Brockenhurst College’s new Greenwood Bursary, which is funded by a retired Lyndhurst couple.

Eighteen-year-old Josh Carter will receive tuition fee funding from John and Marion Greenwood for the first three years of his four-year MSci Geology course at the University of Bristol.

The former Priestlands School pupil was officially presented with the funding award by John Greenwood during the College’s Gala Awards ceremony in September.

Josh was chosen as the first beneficiary of the Greenwood Bursary back in April but had to wait until he received his grades and secured his university place before it became official.

At Brockenhurst College he studied A Levels in Physics, Mathematics, Geology and Computer Science.

Josh said: “The Greenwood Bursary has allowed me to pursue a previously daunting and unsure path.

“Now, knowing how much someone is willing to invest in me is a motivational boost like no other, and for that myself and family are eternally grateful.

“All that’s left now is to knuckle down and change the world,” he added with a glint in his eye.

The Greenwood Bursary aims to ensure that a talented and hardworking Brock student from each future academic year benefits from a university education they may not receive otherwise.

Successful students will have selected a three-year BA or BSc degree programme in science, technology, engineering and maths-related subjects, known collectively as STEM.

In addition, eligible students must be studying sixth form STEM subjects and show they face financial hardship before they may be chosen to receive the award by a bursary selection panel.

STEM subjects and advancement through education are particularly close to the Greenwoods’ hearts.

Josh will now regularly update the Greenwoods about his progress and meet with them every summer to talk about his future.

After announcing the Greenwood Bursary earlier this year, John Greenwood said: “We’re in the privileged position of being able to help young people realise their potential by gaining a university education, so why wouldn’t we want make that difference?”

The application process for the 2020 Greenwood Bursary will open to Brockenhurst College students later this Autumn.