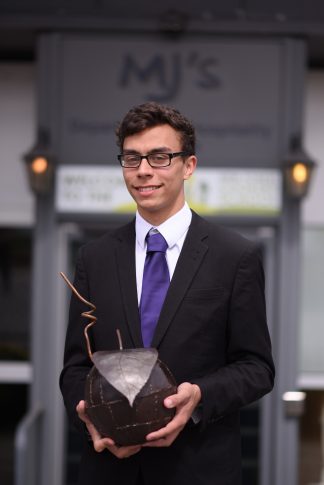 His ‘Cornish Coast’ cocktail made from Calvados, Kahlua, smoked sea-salted caramel syrup and clotted cream, beat beverages made by representatives of 14 other European countries at the grand final in Granville, Normandy.

Mark showed no signs of nerves as he mixed his drink in front of around 200 spectators drawn from across the continent’s hospitality industry.

He was judged not only on his technical skills and professionalism, but also on the rationale of his recipe. Finally, the judging panel graded his drink according to its appearance, aroma and taste.

Mark was awarded a trophy, a cocktail-making kit and a weekend back in Normandy. He will also be invited back next year to shake his winning drink once again.

Afterwards Mark said about his winning recipe: “When I think of the seaside, the one thi
ng that always comes to mind is the times spent on holiday in Cornwall – the beach, the sea and the delicious creamy Cornish fudge. So, I thought I would make a cocktail that reminded me of that.”

Head of Hospitality at Brockenhurst College, John MacArthur, said: “We are absolutely thrilled for Mark. No doubt, winning this competition has given him a profile that will enhance his employment prospects.”

Mark won the right to participate in the grand final after winning his national heat, organised by the UK Bartenders Guild, in London back in February.