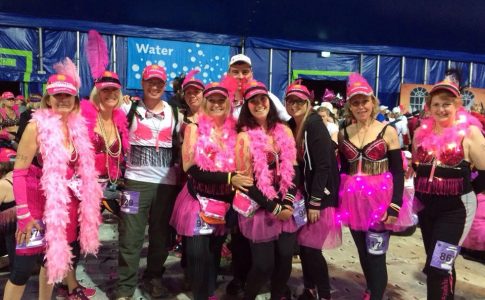 A group of mature upholstery students from Brockenhurst College has thanked the public for donations after raising more than £8,000 for breast cancer causes by completing the London Moonwalk night-time marathon.

Outstripping their target by an incredible 470%, the team members spoke recently of their surprise and delight at the level of public support they had received.

She added: “We are so, so grateful to everyone who has donated. This cause is dear to us all, so the support we’ve had has been very touching.”

Team member Charlotte Merritt, who has undergone treatment for the condition, said: “Thank you to everybody who has supported us. You are all heroes in this fight.

“I know my treatment was more effective because of cancer research, and it’s the continuation of that research that will lead to more positive outcomes year-on-year.”

When the idea came together the group aimed to raise £1,700, making £8,000-plus a considerable overachievement.

You can still show your support by donating through the group’s JustGiving webpage. The address is www.justgiving.com/fundraising/Moonwalk2017BrockCollege