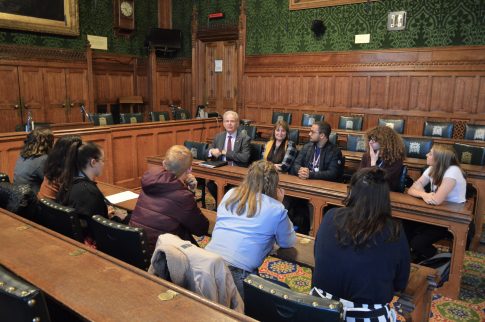 New Forest East MP Julian Lewis will formally present a petition calling for increased college funding on the floor of the House of Commons on 29th November.

It comes after a group of A Level Politics students from Brockenhurst College started the petition that calls on the Government to ‘increase college funding to sustainable levels’.

The document, which has reached over 63,500 signatures, highlights how government funding has been cut by almost 30% in real terms over the last ten years, while school sixth forms have been less affected.

A recent report from the Institute of Fiscal Studies described 16-18 college education as ‘the biggest loser from education spending changes over the last 25 years’.

Nine students made the journey to Westminster last month to raise their concerns with Dr Lewis who agreed to support their cause.

At 10,000 signatures, the Government provided a response that stated: ‘the Government is funding priorities in FE including new T Levels and looking at the needs of colleges ahead of the Spending Review’.

Politics student Charlotte Jones, who started the petition, said: “The inequality between pre-16 funding in secondary schools and that received for 16-18 funding in colleges has been a long-term issue, which we hope as many people as possible will help us to resolve by supporting our petition.”

She added: “All we want is equality, and I think that’s fair to ask.”

Julian Lewis MP said: “I look forward to presenting the petition on the floor of the Houses of Parliament, drawing attention to the very large number of people who have signed the online petition, which could lead to a parliamentary debate on this very important subject.”

You can find the petition online at https://petition.parliament.uk/petitions/229744