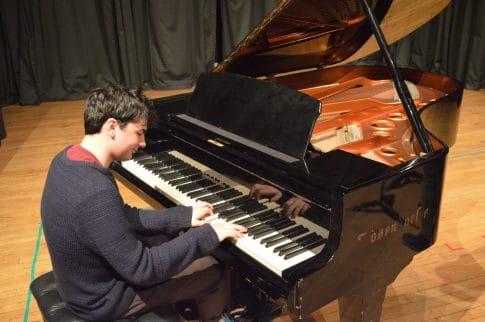 Up-and-coming Brockenhurst College musician Samby Anderson has won an award from the Martin Read Foundation (MRF) to support his progression.

The first year student was nominated by his teacher Tara Gadd for the 2020 scheme supporting young composers, which this year focusses on percussion.

Samby submitted two compositions, one for piano and one aimed at a small-scale orchestra.

A panel of three judges marked his work on imagination, scoring, notation, flair and ambition.

And they were clearly impressed, awarding Samby fifty-one points out of sixty and ultimately one of four prestigious places on the 2020 scheme.

The MRF panel noted of Samby:

‘Clearly a very committed musician who is engaging with many different styles. Good imagination, a real sense of a sound world with some creative performance directions. Lots of potential.’

The sixteen-year-old from Salisbury will also receive a £300 award for special tuition and associated costs.

He has selected Winchester based Alison Willis to mentor him throughout the composition process.

The final piece, which will last 4-5 minutes, will also be submitted to the BBC Inspire competition.

Following his success, Samby said: “I’m very pleased to have received this award and hope to use it to develop my unique voice as a composer and learn as much as I can.”

The young music protégé, who plays lead guitar in Brock-born band Moussedream, has ambitions to study composition at university in London.

He commented: “I’m hoping to study somewhere in London because it’s such a great place culturally for all kinds of art.”