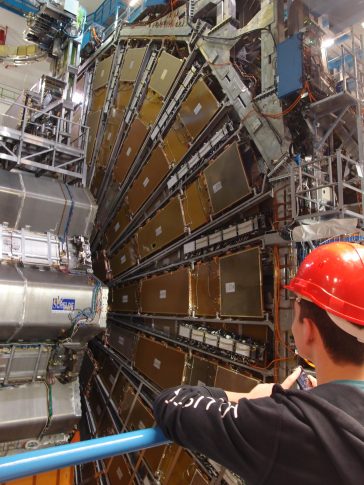 The group of 30 flew to Geneva, Switzerland, to visit CERN, home of the world-famous Large Hadron Collider (LHC), which was built to unlock secrets of how the universe was created.

On a standard trip, students would tour the facility, attend exhibitions on microcosm and universal particles, then listen to talks from researchers before visiting the super-conducting magnet test facility.

However, the Brock students were also taken 100 metres below ground to see the LHC Atlas Detector, which gathers and identifies hitherto undiscovered particles from the debris of collided matter.

This was possible because the group reached out to Atlas Detector researchers through targeted correspondence instead of relying on the traditional application route alone.

In addition, the group won the opportunity to complete three laboratory experiments alongside leading researchers after submitting a successful application detailing why they deserved the additional experience.

This application required them to complete question booklets to demonstrate their aptitude, which they duly did. What’s more, they were the first further education group to complete all three experiments in a day.

Student Thea Irvine said: “This was a once-in-a-lifetime opportunity to learn at the leading-edge of physics.

“It was a real team effort to get the special access and perform the experiments. It’s also something I’ll never, ever forget,” she added.

Physics Lecturer Hugo Gibson said: “Researchers said they hadn’t seen a group manage to complete all three experiments in a single day until our students did.

“Also, I was delighted to see the students being so passionate about the subject and to witness them up late in the hostel working on physics because they wanted to impress the researchers on the lab day.”