Prime Minister Rishi Sunak’s former school – Winchester College – was the august backdrop for a group of Brockenhurst College students who participated in an evening of academic insight and enlightenment there recently. 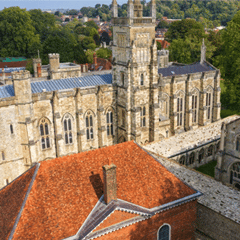 Alongside Winchester College learners, known as Wykehamists after the school’s founder William of Wykeham, the group assembled in the public school’s history-steeped New Hall lecture theatre.

This was for a presentation by geneticist Dr Adam Rutherford from University College London who spoke on the controversial topic of eugenics.

Eugenics is the idea that human reproduction can be contrived to ensure that only genes seen as desirable can be passed on, therefore ensuring a population perceived as superior.

This idea was popular with the Nazis, who sought to justify it in terms of Darwinism, meaning the survival of the fittest. 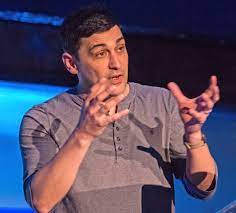 However, Dr Rutherford critiqued eugenics as little more than pseudoscience and warned that it represented a gross oversimplification of genetics.

He added that despite us now understanding more about genetics than ever, we still do not understand enough about how we might prioritise the progression of so-called desirable genetic traits if we ever wanted.

Following Dr Rutherford’s summing up, the six Brock students adjourned for supper alongside a smaller group of Wykehamists.

This was hosted by Winchester College Warden Sir Richard Stagg, a former British High Commissioner to India and former British Ambassador to Afghanistan.

Also present was Dr Rutherford, giving the group an opportunity to discuss his eugenics presentation and pose questions. 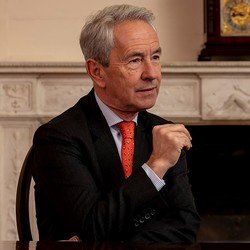 Brock Assistant Principal Guy Francis said afterwards: “This was a unique learning opportunity for our students on several different levels, so my most sincere thanks go to our friends at Winchester College for their kind invitation.

“We were welcomed as equals and enjoyed an enlightening lecture by an eminent academic in Dr Rutherford, who was very easy-going and magnanimous in the question and answer phase over supper.”