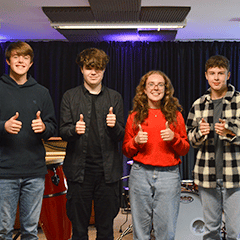 Bournemouth-based singing teacher Andrew Foan, who coaches members of the group outside of college, made the trip as well.

As well as soaking up the culture in one of Europe’s most picturesque cities, the group enjoyed singing workshops led by professional opera singers.

These took place in Conlegliano, a town just outside Venice, in the Convento di San Francesco.

The tourists also watched performances at the church of Madonna dell’Orto.

One of the highlights was meeting world famous opera star Roberta Canzian, who has appeared on both stage and screen.

William Waterhouse said: “Some people worked on their Italian and opera pronunciation skills, some people learned how to be more confident in their performance, and others worked more generally on their singing technique.”

Tom Grewcock added: “We had a few opportunities to head out and explore the region and enjoy the sights of Venice, where we ate plenty of ice cream and watched a premiere of L’Elisir d’amore.”