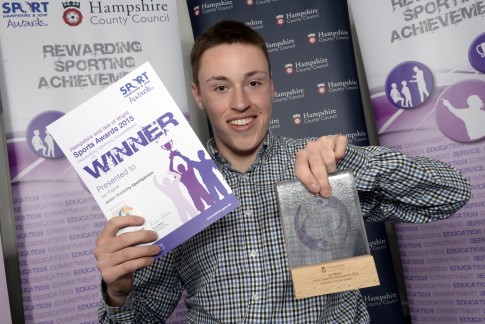 Over 240 athletes, coaches, officials, volunteers, teams and clubs were nominated at the annual event held at Southampton Football Club.

The evening was presented by Kris Temple of BBC South Today. It is the only county-wide event to recognise commitment, performance and excellence across all sports.

Ian won his first senior title in the German Open last year, and is now ranked third in the world in the junior division.

He commented: “It feels great to have won an award like this and to be recognised for my achievements. I would like to thank my coach, my parents, the Tennis Foundation and Brock College for all the support they have given me.”

Ian added: “Brock and all the staff have been very accommodating to my requirements.”

College Principal, Di Roberts CBE said: “On behalf of the College I would like to congratulate Ian on his award. This honour is testament to Ian’s dedication and it is wonderful to see him recognised.  He has worked incredibly hard to achieve this and we are all very proud of him.”

Cllr Keith Chapman, Executive Member for Culture and Recreation of Hampshire County Council commented: “The annual Hampshire & IOW Sports Awards are a fantastic way to celebrate the amazing achievements and efforts of our sporting community. Opportunities to recognise the people who dedicate themselves to sport, both participants and those who make sport happen, are often very few at a local level. All the nominees and winners should feel very proud of their achievements and their impact on so many in the local community.”

The Hampshire and Isle of Wight Sports Awards is a joint venture between Hampshire County Council and Sport Hampshire & IOW with support from the local sports councils & forums in Hampshire.