Kind-hearted students and staff from Brockenhurst College gave their time to fill 68 shoeboxes with Christmas treats for young carers and vulnerable students in the South. 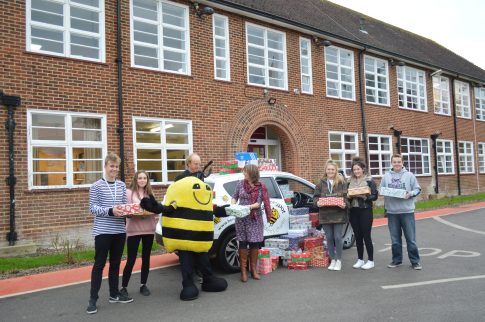 The initiative was part of The Honeypot Christmas Shoebox Appeal, and was undertaken at the College in partnership with Rotary Club of New Forest.

Among approximately one thousand youngsters who will receive the shoeboxes are around 40 from Lymington and 60 from the Waterside area.

Viv Carter from Honeypot, which is based near Blackfield, said: “We cannot thank Brockenhurst College enough for its contribution. Our thanks also go to the Rotary Club, which has helped coordinate this year’s effort.”

Handing over the shoeboxes, Brock Principal Di Roberts CBE said: “Every year we engage with this hugely worthwhile cause, and every year I am so impressed by the kind-heartedness shown by our students and staff.”

Since 1996 The Honeypot Children’s Charity has worked to improve the lives of young carers and vulnerable children by providing respite breaks and on-going outreach support.

Shoebox recipients generally care for a chronically or terminally ill loved one, or have a parent with drug, alcohol or mental health issues.

You can find out more about the organisation on its website: http://www.honeypot.org.uk/