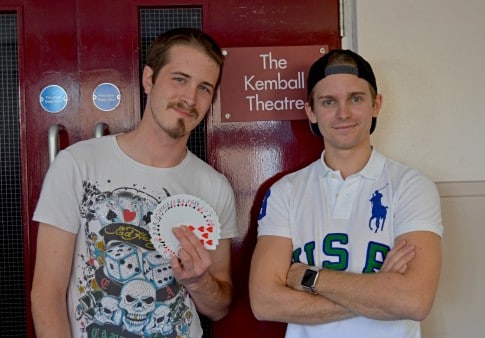 Two professional performers, who once studied at Brock, visited the College recently to run a masterclass on how to make it in show business.

Joe Sleight (right) and Paddy Bennett (left), who are both 26, each completed a BTEC in Performing Arts back in 2007.

On their return the pair led warm-up activities and a performance workshop before taking questions from young would-be stars of stage and screen.

During the visit both Joe and Paddy also spoke highly of their former teacher, Graham Kemball, who sadly died last year.

Upon leaving Brock Joe set up his own theatre company and toured the south of England for a number of years performing in musicals.

He later gained a place at the Guildford School of Acting and completed a degree in musical theatre.

Right now he is performing in the musical Blood Brothers as the character Perkins, and is also an understudy for the part of Eddie, which is one of the two main characters.

As well as Blood Brothers, Joe has performed in the political musical ‘Chess’ and classics Cinderella and Peter Pan.

Paddy on the other hand has worked as numerous characters at Disneyland Paris and is currently working as a performer at Butlin’s.

Joe said about making it as a performer: “You must be prepared for knock-backs because they will happen.

“Plenty of successful actors and actresses I know have been turned down many times before landing a part.

“It’s been absolutely fantastic to come back to my old college today and meet the students – they’re a great bunch.”

Student Hannah Worlock said: “It was really inspiring talking to Joe and Paddy, especially about their jobs in Blood Brothers and Disneyland.

“These are exactly the kinds of 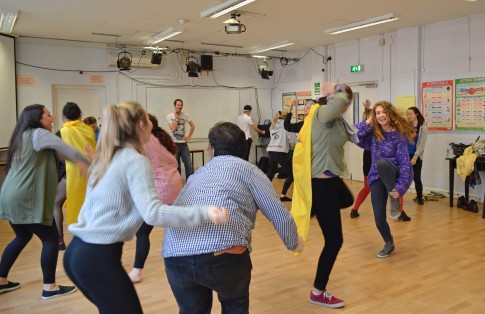 things I would like to do in the future, so I definitely look up to them.”

Head of Performing Arts and Music, Tara Gadd, said: “Having Joe and Paddy back to give advice on auditioning, choosing a drama school and the way the industry works has been incredibly valuable.

“It was particularly moving to hear them talk about their late mentor Graham, who believed in them and began to shape them as confident people and performers with excellent values and skills.”