Hospitality students at Brockenhurst College scooped an impressive haul of awards at this year’s Wessex Salon Culinaire competition, organised in association with the Craft Guild of Chefs.

Between them they managed ten Gold Awards, each of which required an overall score of at least 90%.

Among the competitors were mainly student chefs, including some from as far away as Scotland, Northern Ireland and the Channel Islands.

The five categories comprised: Live Hot, Live Cold, Restaurant, Display and Wessex Bake Off, with all work performed against the clock.

Brock student Supatthra Viriphan said: “The competition has been a fantastic experience. I’m delighted to have received two Gold Awards, despite this being my first competition.”

Another competitor from the College, Charlotte Kelley, said: “I was so nervous about competing, but I’ve really enjoyed every minute of the event.  I’m wearing my medals with pride.”

Judges included hospitality experts who scrutinised each entry for taste, smell and presentation, as well as the chef’s efficiency and hygiene standards.

Among the judges were representatives from local establishments including Chewton Glen Hotel and The Montague Arms. 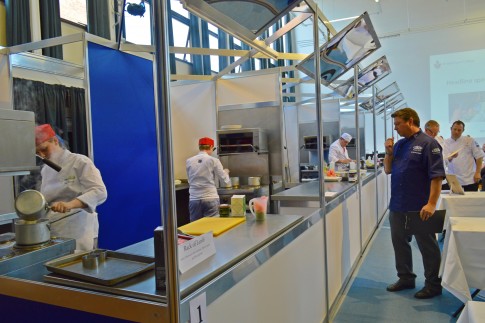 Afterwards the College’s Head of Hospitality Studies, John MacArthur, said: “This year’s event has been another brilliant success.  The quality of the competitors has been outstanding.

“I’m extremely proud of all of my students here at Brockenhurst.  They have worked so hard, not only in the competition, but also behind the scenes,” he added.

Vice-president of the Craft Guild of Chefs, Stephen Scuffell, said:  “It was great to see so many students taking part in the competition.

“All this helps ensure that our industry continues to flourish as young people look to hospitality as a rewarding career.”