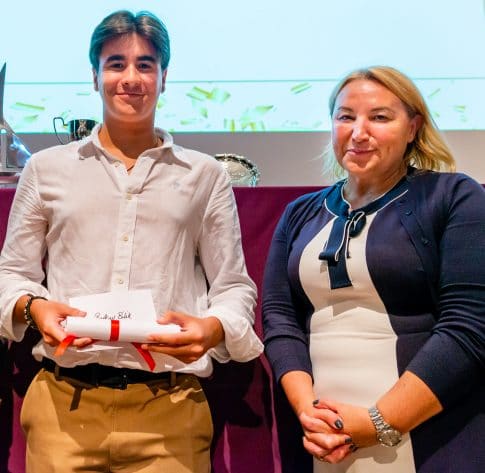 More than 150 guests sat around dining tables in the College’s Main Hall for the evening event that saw 40 awards presented for excellence in learning or significant contributions to the college community.

Winners walked away with a certificate and £100, as well as a citation from the teacher who nominated them.

It was the first event of its kind at the New Forest college since the start of the COVID-19 pandemic.

Berkay Bilik from Southampton won the night’s most anticipated award for Student of the Year, which he earned through his outstanding academic performance.

He achieved A*s in A Level Mathematics, Further Mathematics, Physics and Computer Science, and has progressed to University College London where he is studying Mathematics and Physics.

Berkay, who was a member of the College’s Aspire Academy for academically gifted learners, said: “I am so thrilled to have received this award, because I see it as a recognition of my dedication. Thank you to everyone at Brock for supporting me!”

Meanwhile, the Teacher of the Year award, voted for by the Students’ Union, went to Psychology and Criminology teacher Matilde Wear.

Matilde said: “I’m totally stunned but feel really, truly honored. I just want to say a big thank you to Brock for all the support I have received this year.”

The Greenwood Bursary, which funds three years of a university undergraduate course for a STEM student who faces financial hardship, was awarded to Alex Northover by John and Marion Greenwood from Lyndhurst.

Alex, who aims to establish a career as a Clinical Psychologist, is now poised to start her degree in Psychology at University of Bath thanks to the Greenwoods’ philanthropy.

As well as students and staff, the event was attended by parents and sponsors, and began with a drinks reception on the College’s front lawn.

Guests were then served a two-course meal prepared by students from the College’s on-campus fine-dining restaurant.

Principal Polly Perkins CBE said afterwards: “I congratulate all tonight’s winners on their achievements and I look forward to following their continued success.

“I know they will all make a meaningful contribution to our society and stand tall as outstanding ambassadors for the College.”

You can see the full list of winners here: