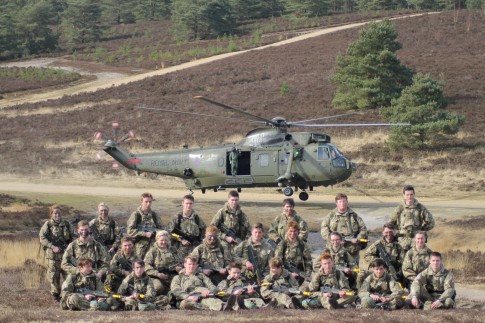 After being split into groups, the 25 students were able to experience a ‘fun flight’ in the Westland Sea King helicopter. The RN crew consisted of Flt Lt Rowlands, LT Clark, SSGT Collacott and the squadron Commanding officer Cdr Gavin Simmonite DFC RN.

Hankley Common, near Elstead in Surrey, is an area of heathland that has been used in numerous film scenes. James Bond productions such as, Skyfall, Die Another Day and The World is Not Enough have all featured the location.

Student Will Fairbairn said: “It was such an amazing opportunity and very inspiring! I am now even more excited about my future career as a Royal Engineer”.

Head of Public Services, Mark Thomsett, added: “It was a once in a lifetime experience for some of the students and we’re very grateful to the Royal Navy.”