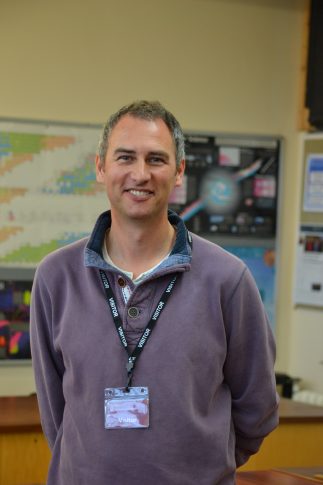 Professor Scott, who works at the University of Reading’s Department of Meteorology, also delivered a presentation called:’ From Brockenhurst to the sun and back – reflections on a career in space science’.

The presentation to Physics students and staff gave insights into our solar system, galactic cosmic rays and the study of lightning.

He then discussed the high-points of his career so far, and answered questions about what it is like to work at the cutting edge of physics.

In 2014 Professor Scott led research into solar winds and lightning, the findings of which were published in the peer-reviewed scientific journal, Environmental Research Letters.

Among other things, the research findings suggested that solar winds can increase lightning on Earth.

Following his presentation, Professor Scott said: “I’m very excited and privileged to come back here to Brock. It’s amazing to see how many extra buildings and facilities are available to the students now compared to when I was here back in the 1980s.

“I’m blown away by the passion that both the faculty and students show for physics, and I hope I’ve been able to shed some light on what it’s like to work in STEM after education.”

Second year student Denver Marchment said: “I love it that we get the opportunity to listen to guest speakers from universities. It makes A Level Physics so exciting compared to what we did at school.”

Head of Science Rachel Hughes said: “It’s brilliant to be able to show the students what you can achieve with A Levels from Brockenhurst College.

“Professor Scott is able to capture students’ attention so well, and he gave a very realistic idea of post-college STEM opportunities.”