Twilight event was led by the University of Oxford

Fifteen Year 11 students from Noadswood School in Dibden Purlieu visited Brockenhurst College recently for a University of Oxford-led session on how to get into a top university.

The twilight session featured Brock students who had sat Oxford admissions tests that day, and was opened by Brock Principal Di Roberts CBE, who handed over to Luke Maw from St Edmund’s Hall at the University of Oxford.

He spoke to the 15-16-year-olds about life at Oxford, why they might want to think about university sooner rather than later, and pointed out what makes a stand-out candidate who appeals to the top institutions. 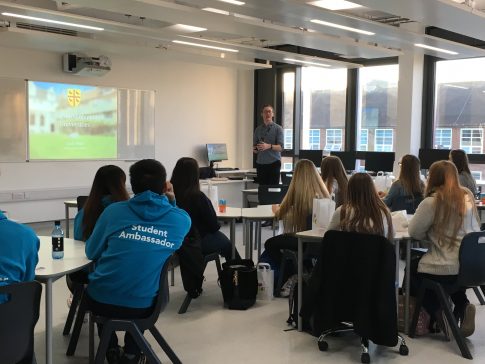 The Brock students then talked about their application journeys and the various paths to higher education they have discovered through Brock.

Each one is a member of Brockenhurst College’s Aspire programme, which focusses, among other things, on coaching for the university application and interview/admissions experience.

Finally, pupils’ parents joined for presentations and a full Q&A session with both Brock staff and Luke Maw, who works in the Oxford admissions department.

Mr Maw talked to the enlarged group about why he believes Oxford and Cambridge, or Oxbridge as they are known together, deliver world-class learning opportunities through which you can place yourself among the world’s brightest young minds.

Assistant Principal Ann Johnson then gave a 15-minute presentation called: ‘How Brock can prepare you for Oxbridge and other top universities.’

Anna Nguyen, who is a Brock Aspire student and Students’ Union President, spoke afterwards about her understanding and experiences.

She said: “University degrees require a wide range of personal skills, including: academic commitment, independent study and time management, as well as the ability to build up a balanced social and intellectual life.

“Brockenhurst College stands out as an excellent institution, not only because of its achievements throughout more than 100 years of history, but also its positive student environment,” she added.

Noadswood School Teacher, Mr PJ Fenton, said afterwards: “Our pupils found the event challenging and exciting, and it helped them to see the possible pathways they might wish to follow over the coming years.

“They particularly enjoyed the presentation by Luke Maw from St Edmund’s Hall regarding Oxford University life.

“As a school, we believe in offering our pupils every available opportunity. We hope events like these at Brock will continue in future years and we look forward to continuing our involvement.”

Forty-two per cent of Brock Aspire students go on to Russell Group universities straight from college, including Oxford and Cambridge, according recent data. The national average for all students is 18.5%.