A modern languages student from Brockenhurst College, who only started learning Spanish last year, has received a conditional offer to study Spanish and Linguistics at the University of Oxford. 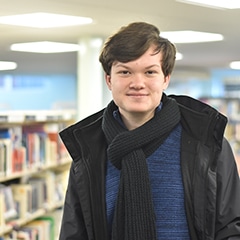 Harry Beckett from Hythe impressed staff at The Queen’s College with his UCAS application and interview recently, and now needs three A grades at A Level to secure his place.

The former Noadswood School pupil said: “I’ve quickly gone from being elated at receiving an offer to a sober realisation that I need to work as hard as ever to do myself justice.”

Harry became more-or-less fluent in conversational Spanish after his talent was spotted and nurtured by teachers Sally Platt and Ana Gaztanaga.

Despite not particularly enjoying French at school, the seventeen year-old has blossomed as a linguist at Brock.

One of his strategies for learning success was reading Harry Potter and the Philosopher’s Stone in Spanish from cover-to-cover – an approach he calls ‘brute-forcing’.

As well as Spanish, Harry can speak conversational Dutch. 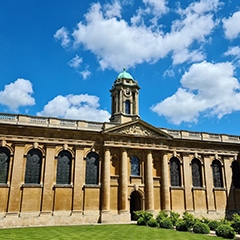 He commented: “I absolutely love the sounds that are featured in Dutch and I’m really fond of the Netherlands – Dutch people also have a dry sense of humour that’s absolutely hilarious.”

The use of humour in communication evidently appeals to Harry, who added: “I think people from Latin America tend to have an excellent sense of humour as well.”

He has also accepted the challenge of learning a non-Latin language at college, namely Chinese.

Harry said: “I find that learning non-Latin languages, though challenging, is a really fun experience.

“Lots of people will learn many languages of the same family, but for me I enjoy the massive differences that languages like Chinese provide.

“I find the difficulty of learning completely alien systems can trigger motivation to persevere.”

Harry’s Spanish teacher, Sally Platt, said: “Harry has an extraordinary natural talent for processing linguistics, and it has been a real pleasure to nurture his gift and witness his speedy development.

“As well as being unbelievably modest and humble, Harry is a very diligent independent learner who works hard and aims high – we look forward to providing Harry with all the help and support he needs to achieve his goals.

“Promising young linguists choose Brock because they are able to study Chinese in addition to their A Level subjects.

“This opportunity is invaluable for students like Harry who have a passion for languages – it also really sets them apart on their UCAS applications.

“Thanks to the hard work of the Chinese teachers – Jie, Xing and Shirley – Harry has been able to study Chinese and excel in the subject.”

About the prospect of studying at university, Harry said: “The linguistics aspect is really important for me, and the course at Oxford seems to go into great detail – it won’t be easy but it’s exactly what I’ve been seeking.”

Early in his Further Education journey, Harry had ambitions to study Law – something that changed when he discovered his ability in languages.

Signing off, he said: “I’ve never been a particularly above average student in school, but with language subjects I’m grateful to have found something that really clicks with my way of thinking and makes me enthusiastic to learn more.

“I’ve learned it’s paramount that you put your passion first and do what you really enjoy.”