I loved my time at Brock. I made so many new friends and got to study things I actually cared about. I always knew I wanted a 'creative' job, but it wasn't until I visited Brockenhurst that I realised you could study Film and Media on a more in-depth level than what was on offer elsewhere. 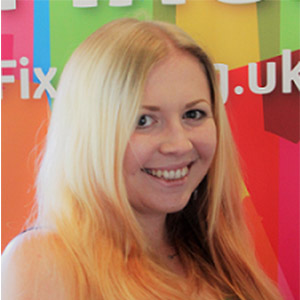 What made you choose to study at Brock?

“The wide range of creative courses that were on offer. I always knew I wanted a ‘creative’ job, but it wasn’t until I visited Brockenhurst that I realised you could study Film and Media on a more in-depth level than what was on offer elsewhere. I knew the college would be able to offer more practical experience with film-making than others as well.”

What do you do now?

“I’m now a Creative Producer at a charity called Fixers, where I make short films with young people about issues that are important to them. In the past I have also worked on a number of large scale TV shows, including Ant and Dec’s Saturday Night Takeaway, the Undateables and Through the Keyhole.”

What were your ‘highlights’ while attending Brock?

“Using proper video equipment for the first time. Prior to starting at Brock, I’d never actually filmed anything before (this was before you could make movies on your phones!) so being able to use actual video equipment was really exciting. I also loved analysing films and TV shows in class, sharing opinions and figuring out hidden meanings. I’d never looked at film that way before so it gave me a whole new perspective when watching something. And of course, our Media course trip to Budapest in 2010!.”

What made you choose your career path?

“In school, I was always a bit of a ‘film-geek’ and loved watching the credits at the end of movies, seeing all those hundreds of people who worked on one single film was amazing. I knew I wanted to be one of them. When I realised that working in Film and TV was actually an option, I knew that was exactly what I wanted to do. I made sure I got on the right path by studying Film and Media A Levels at Brock, which led me to a degree in Film and TV Production and now, a career in TV.”

How did Brock prepare you for your future?

“For a lot of Students, Brock is their first taste of independence. You’re no longer confined by the strict schedules of school and you’re studying things you’re actually interested in, forging your own futures. My time at Brock definitely taught me about independence and how to manage my time efficiently, which helped me enormously at University as well as in my career. It also gave me so much valuable knowledge about my chosen subjects, which prepared me better for my University degree.”

“My teachers were great, so enthusiastic about the subjects they taught. You could always have a conversation with them about a great film you’d seen.”

How do you feel about your time at Brock?

“I loved my time at Brock. I made so many new friends and got to study things I actually cared about. I learnt a lot of life skills as well as academic ones and for that I will always be grateful.”

What do you think makes Brock such a special place?

“The community and diversity, students from all over come to Brockenhurst and having spent the last 5 years with the same people day in day out, it’s great to have a change of scene. College is such an important time and can really impact what you chose to do with your life, so it’s vital to be in a place that nurtures that. It also gives you the opportunity to gain life skills, which are just as important as getting good grades.”