My highlight of studying at Brock was getting to use the amazing facilities so freely, the college productions and the staff.  I had never been in a recording studio before Brock, so it was amazing to get to use the college studio so often and learn while also getting to sing 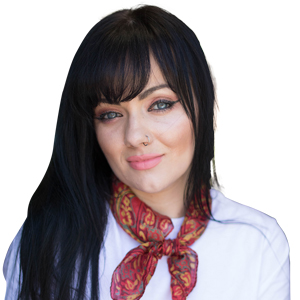 Professional singer working with Florence and The Machine

What do you do now?

“I am a professional vocalist, vocal arranger and songwriter.  I have worked as a touring backing vocalist with Florence and the Machine for three years, and this has included headlining Glastonbury festival in 2015.  I also work with the likes of John Newman, Olly Murs, Demi Lovato, Beverly Knight, Alfie Boe, Jason Donovan, Kodaline and Keala Settle (The Greatest Showman).

I have written for various artists and production companies and my vocals have featured on major projects. These include adverts for Amazon, American Express, Playboy and Sainsbury’s, and for TV shows including Hollyoaks, Made in Chelsea, Mad Men and Luther, and for movie soundtracks including ‘A little bit of heaven’ and ‘I give it a year’.   I have also been a talent scout and vocal coach for ‘The Voice’ since 2012.”

What was your highlight of studying at Brock?

“My highlight of studying at Brock was getting to use the amazing facilities so freely, the college productions and the staff.  I had never been in a recording studio before Brock, so it was amazing to get to use the college studio so often and learn while also getting to sing.”

How did Brock prepare you for your future?

“Brock prepared me so well for both live performance and studio work.  Being the only singer in my music tech class, I was frequently getting to record live for other students’ projects and coursework as well as my own.

The first time I had to record in front of anyone else I was absolutely terrified and had to face the wall so as not to look at anyone. However, I got to use the studio so often that it became easier and easier. It also helped develop my ear for harmonies, which has been imperative to my work now as a backing vocalist and arranger.

I was hugely encouraged by both my fellow students and the teachers who really pushed me (in a very comforting way rather than a pushy way), and I left Brock feeling incredibly confident in both a live and studio environment.”

“I really felt like the teachers at Brock were incredibly switched-on and sensitive to students’ strengths and weaker areas and knew exactly how to nurture my strengths and improve my weaknesses.   When I started college I really knew very little about music or what I wanted from it. But my teacher always showed a huge amount of belief in my raw talent, which was my voice, and was incredibly encouraging when showing me that the voice is a very important instrument.

I was also lucky enough to be taught by the late Graham Kemball, who really was an incredibly special teacher and person.  Graham persuaded me to audition for a college production of ‘Twelfth Night’, and I was shocked to get one of the lead roles, which did incredible amounts for my confidence and triggered my love of performing and being on the stage.  Graham was such an exciting and inspiring person to be around and he made students feel like they could do absolutely anything.

I didn’t arrive at Brock like a lot of performance students did. I hadn’t been to any theatre schools, or had any singing or dancing lessons, or any experience at all really… I just had a genuine love for singing and performing, and at a different college I could have very easily got lost among louder voices. But at Brock I grew so much in those two years and that is absolutely down to the support of my teachers.”

How do you feel about your time at Brock?

“I have really positive feelings and happy thoughts about my time at Brock.  I went to college not thinking that music was a viable career. But I wasn’t prepared to let go of my love of it.  I left absolutely knowing that there was no other career for me. However, nothing could have prepared me for the level of work I am lucky enough to do today. I still pinch myself sometimes.”

What do you think makes Brock such a special place?

“I think there is a lovely community aspect to Brock, with the teachers as well as the students.  I very much felt like my teachers were friends as much as they were there to teach me.  There was a mutual respect that the students have with the teachers where neither wants to let the other down and I think this absolutely gets the best out of everyone.”